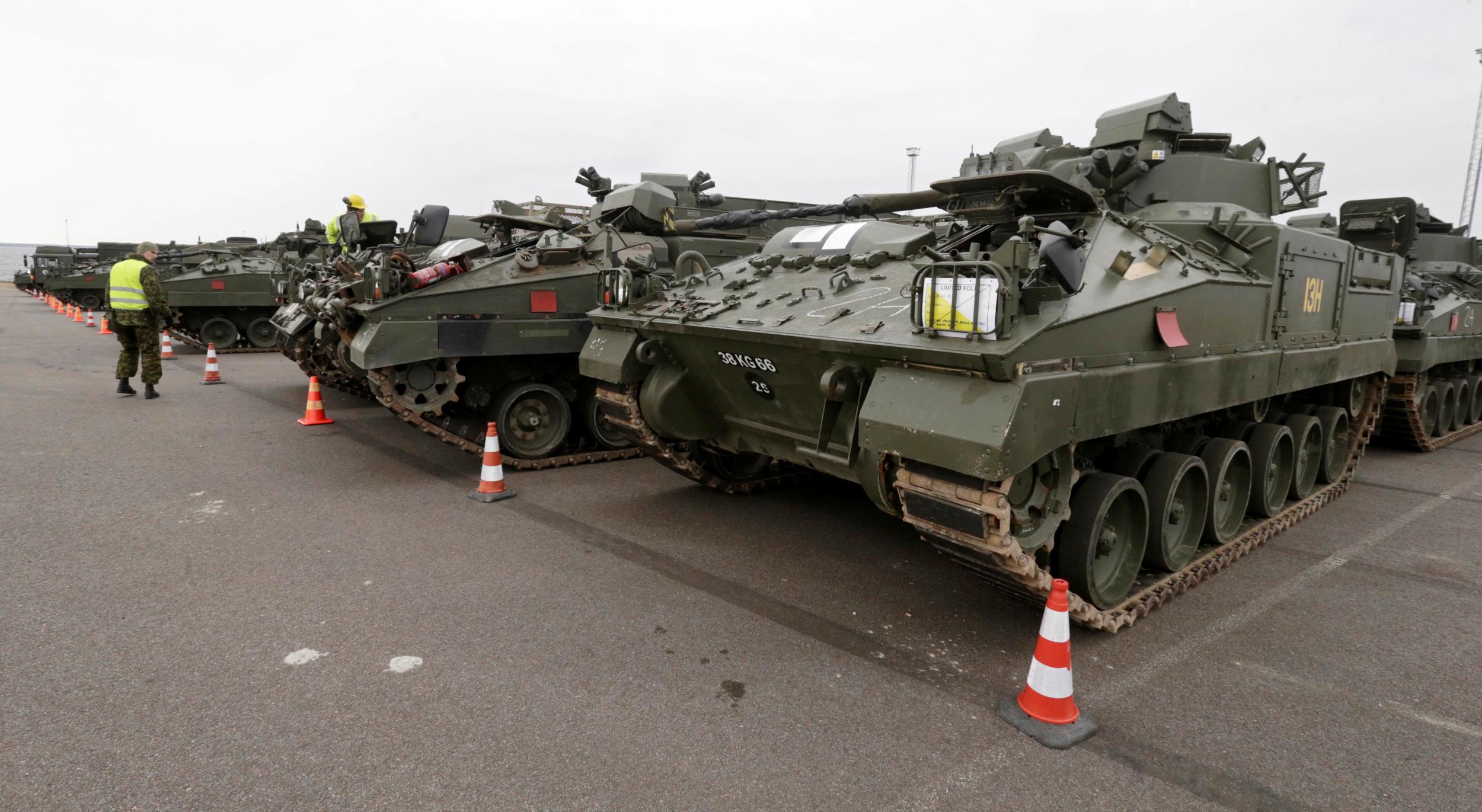 Recent U.K. tenders have been geared toward the support and infrastructure of the U.K.'s military. This tender was released in October 2018. It offers Battle Group Thermal Imagers support and maintenance.

The tender has the following CPV codes:

The contract was recommended toward subject matter experts do to the technical nature of job. The Ministry of Defense was looking for six different companies to supply the tender requirements. The tender itself is to help with the support and maintenance of thermal imaging systems for various targeting and navigation systems within the armored vehicles. We will address the requirements of the tender and the uses for the items later on.

Applicants were required to fill out a PQQ and contract will be the “restricted procedure of DSPCR 2011”. DSPCR 2011 is the procedures for the contracting of services for the procurement for defense and sensitive securities for England, Scotland, Wales, and Northern Ireland. This resource document is roughly 19 chapters long not including the glossary of terms and the frequently asked questions. The PDFs are easily accessible through the U.K. government's website and should be reviewed before any contracting or tendering work is sought from the U.K. government.

The BGTI tender is one of several infrastructure related tenders issued by the Ministry of Defense and U.K. government at large. It deals with the advancing of modern combat to deal with one of the largest problem for units on the battlefield, that problem being sight or lack thereof in battlefield conditions.

This tender is for the improvement and maintenance of thermal imaging equipment on two of the United Kingdom's armored vehicles. Those vehicles are the FV510 Warrior and the CVR(T) Scimitar Armoured Fighting Vehicles. To understand why this is necessary let us quickly look at each of these vehicles.

The Warrior line of armored vehicles began its develop in the 1970s in order to replace the current the FV430 series of vehicles. GKN plc won the proposed contract in 1980 and was itself ultimately purchased by BAE systems. The company went on to produce 789 FV510 Warriors and its variants for the British Army. Its intended purpose being the support and protection of the combat infantry squad. It does this via armored transport to the intended disembark location and via fire support with its 30mm L21A1 Rareden cannon and coaxial machine gun. It has slated to receive an upgrade to a 40mm CTA International CT40 cannon at some point.

This fire support, in addition to basic navigation, is where the BGTI upgrade and support comes in. Previously the Warrior line's night vision solution was image intensifier night vision sights. Currently there is a move to upgrade to Battle Group Thermal Imaging sights with 8x magnification capabilities, manufactured by Thales Optonics, and 350 Warrior units have been outfit with BGTI since 2007. This tender obviously is looking to outfit the rest of these units with BGTI “for sighting and situational awareness, weapon targeting and as an aid to vehicle navigation” (as per the tender).

This plan to improve the capability of United Kingdom's armor vehicles also extend to the FV107 Scimitar. The Scimitar was first fielded in 1971 and is classified as an armored reconnaissance vehicle. It was very similar to the FV101 Scorpion, although it was equipped with a 30 mm L21 Rareden cannon rather than a 76mm gun. Due to the aging nature of the design, the British military wishes to extend its lifespan by upgrading it with new features, including BGTI. This will more than likely be use on the 2010 model upgrade, classified as the Scorpion MKII, which have seen combat use with favorable reports in Afghanistan.

As these plans to upgrade current land vehicles requires an extensive effort to produce and maintain BGTI and related infrastructure, the Ministry of Defense has stated that “The Vehicle Support Team has a requirement for the In-Service support of this equipment which will include the procurement of spares, sub assembly repair, obsolescence management, configuration management, maintenance of publications, and technical support. At the time of the tender's issue, the Ministry of Defense was looking for six companies to fill the various roles of the tender. The contract itself is estimated to be 3 years long with the possibility of a 3 year extension. However there are no “...test/repair specifications, drawings and other technical documentation for this requirement,” in regards to the tender or its 3 year extension. The tender is rather open ended in regards to the “BGTI Future Support contract”. The Ministry of Defense does not guarantee acceptance into the contract and clearly states that filling out the PQQ and publishing it does not ensure that they will accept the the contractor for the position.

Would-be tenderers had 40 days to respond to the Ministry of Defense's invite as issued on October 12, 2018. The planned release date for the ITT is currently November 12, 2018. Tenderers must fill out their PQQ's and submit them by October 31, 2018 in order to be eligible for the open positions.

The tenders of the United Kingdom's Ministry of Defense have taken a more maintenance orient stance after the early 2000s and 2010s. The major trend in recent months is the procurement of vehicles and related equipment like the BGTI. This is mirrored in the tenders for support and maintenance of the infrastructure and computer logistics of other government agencies. It is very clear that the Ministry of Defense is more focused on improving their land vehicles and their related support chain as evidenced by the Major Projects report of 2012 in regards to thermal imaging.

Additionally BAE Systems has come out with their plan to improve the British Army's main battle tank with their electro-optic thermal imaging technology. This technology senses heat rather than light and is in place on several other British military hardware such as the Royal Navy's Queen Elizabeth Carrier and the RAF's Chinook fleet. Its previous use in military conditions in Afghanistan has greatly improved the performance and capability of the RAF's Chinooks, more than likely making it the choice of technology to upgrade current and future armored vehicles such as the Scimitar. However the Warrior will continue to be upgraded by Lockheed Martin through 2019 as per the 2012 Major Projects Report.

BAE Systems and its various off-shoots have been in the lead of the British move toward a more capable fighting force with their efforts to provide mechanized forces with thermal imaging technology and support. Thales Optronics, as a part of BAE Systems, is still within their contracted 15 years of BGTI support and installation until March of 2019. The search for additional contractors to fulfill the role that Lockheed and Thales currently fill is more than likely a move to extend their respective contracts another 6 to 12 years depending on their performance. BAE System's push to improve the British main battle tank indicates that want to maintain their hold on the market of U.K. thermal imaging. The tender's 6 contract openings is more than enough to contract Lockheed, Thales, and BAE Systems, while allowing for newer contractors to prove their abilities and provide extra support.

Since sighting and navigation are so important on the battlefield, this BGTI tender is a major factor in ensuring the British Military can maintain a high level of performance and support to their infantry units with their armored units, be they main battle tank, armored personnel carrier, or reconnaissance vehicle, with an emphasis on the later two vehicles.

More than likely, these upgrades and new manufactures will be a form of BAE system's Thermal Imaging Module TIM 1500. As BAE systems TIM 1500 currently features up to a 4x magnification, there will be some improvements in order to achieve the 8x magnification as desired for the Warrior. However, as time goes on, the Scimitars and Warriors will be completely equipped with BGTIs. This will cause the 600+ BGTIs fielded since 2004 to double if not triple in the coming years. Especially as their use to effectively identify targets and navigate terrain improves. The tender also hints at retrofitting units that have received BTGIs with newer models as they become obsolete.

As the technology continues to develop thermal imaging will become more and more popular while becoming more user friendly and compact. This will enable thermal imager use in all aspects of infantry roles and support, as is being integrated currently, to be even more efficient. It will also mean more affordable options in both the military and civilian markets, resulting from lowering cost of manufacture by refining the process and by selling off surplus stock and obsolete models.”