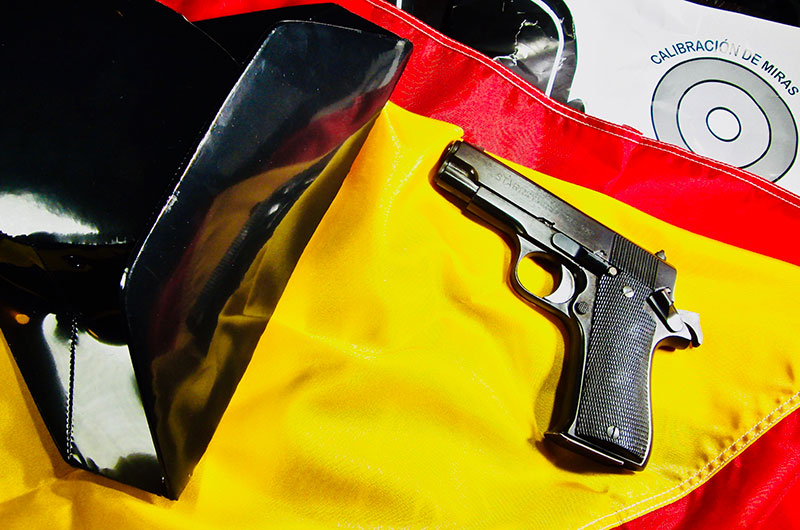 Arms traditions in Spain have a long history.

Once the Spanish Empire ruled half of the world, and mainly due to high-quality firearms. However, the times of the conquistadors are gone, but the weapons traditions have not been lost. Manufactories switched to the production of hunting weapons. Any weapon company of Spain is famous for them; it can boast of good quality and reliability of products.

The pride of the modern Spanish rifle industry is the small enterprise Arrieta. This rifle production dates back to 1916, when Avellino Arrieta opened a small rifle workshop in Eibar. For almost a quarter of a century, he independently collected guns of excellent quality, fulfilling the orders of high-ranking persons, among whom was the king of Spain Alfons XIII. In 1970, the company was transformed into a joint stock company and began selling its guns abroad. Currently, the company is actively exporting its products.

At least, the fact that the king of Spain, Juan Carlos, has recently become the most high-ranking shareholder of this company, speaks of the company's popularity in the country and the high quality of the Arrieta hunting rifles. Arrieta Weaponry Company is a manufacturing type enterprise. This type of production, preserved from the last century, implies a high degree of division of labor, when the whole process of producing guns is divided into certain stages, involving mainly manual labor. Directly at the enterprise itself, less than twenty people are employed. However, the management of the company makes extensive use of the homework of artisans.

The work of the Spanish workers at all times was valued cheaply. Therefore, many companies made masterpieces of rifle technology for British, French and German rifle companies for a reasonable fee. So did the firm Pedro Arrisabalaga, now better known in Spain as Jose Alberto Garate. It produced 15,000 rifles for the famous London-based company Thomas Boss. But all of this is already in the past. Although Spain is not experiencing the best of times, the José Alberto Garate armory firm is now working independently.

For individual orders, employees make only two types of hunting rifles with horizontally paired trunks: smooth bore for all known types of cartridges and nozzle for cartridges of 9.3 × 74 R. The cost of weapons of this company is relatively low. Especially when you consider that the guns of this brand are distinguished by the strongest barrel steel on the continent and the best walnut wood in the world. Guns are characterized by ease of style and outstanding battle.

Not only Spain is famous for its elite rifles, the Laurona company (Laurona), on the contrary, focuses on poor hunters and sportsmen-shooters who want to have inexpensive but high-quality weapons. Naturally, it meets all modern technical requirements and design trends. This firearm factory was founded in 1941 and consisted of only four people (“Laurona” in Basque means “four”).

The small firm Aguirre and Aranzabal (Aguirre y Aranzabal) was known to us even in the times of the USSR. The workshop of high-quality weapons "A and A" has been known since 1917. During this time, it released a little more than half a million guns. The factory has become famous for developing high-class automatic models, which are supplied to twenty-five countries of the world. Most of these expensive, prestigious weapons are still exported to England. During the existence of the trade representation of this company in the British Isles, about two hundred thousand hunting and sporting rifles were supplied there. However, it would be erroneous to believe that "A and A" lives only at the expense of expensive products. Almost half of the models produced by it are inexpensive automatic guns. But these cheap rifles also bear the stamp of good quality, elegance, lightness of style, and the forethought of all the little things.

Currently, "A and A" offers a wide selection of smooth-bore guns. Among them are hunting models with a horizontal arrangement of trunks and bokflints.

Real Fabrica de Armas de Toledo (1761) - the oldest surviving enterprise for the production of small arms and ammunition, is also one of the largest of these enterprises.

It was thoroughly destroyed during the war with Napoleon, restored and expanded until 1850. Later it became a part of the concern Hontoria, becoming one of the main producers of firearms for the army and navy. Now it is the largest arms factory in Spain and has an independent trademark. Real Fabrica de Armas de Orbaiceta (1784) - a factory for the production of small arms in Orbaisset (Navarre), founded by royal decree at the end of the XVIII century.

It was reorganized several times and preserved to our time, fully concentrating on the production of ammunition for small arms.

Once it competed with Toledo, but at the beginning of the 20th century, the factory gradually began to shrink in size, transferring its workers and production space to neighboring factories (artillery and tank). The company has survived to our time and is mainly engaged in the release of large-caliber machine guns.

Founded by José Cruz Echeverría. It began with the licensed production of Smith and Wesson revolvers for the needs of the army, gradually turned into a large arms company, working mainly for the civilian sector and export to Latin American countries. For a long time competed with the company Astra.

For a long time it has engaged in the production of automatic pistols and submachine guns for the needs of the army as well as competed with the company STAR and engaged in the export of its weapons to the countries of Europe and the Middle East.

Over time, it also began to produce shotguns and sniper rifles. Llama firmly occupied its niche in the Spanish and international markets and continues to maintain its position until our time.

Dikar S. Coop. (1980) - a private company based in Vergara for the licensed production of foreign weapons and small-scale production of premium and exclusive samples of pistols, revolvers and rifles. It is the main supplier of premium weapons for FAE.

Agrupacion Social Trabajadores Armeros, S.A.L., ASTAR (1998) is the result of the merger of Astra and STAR, which has become one of the largest firearms manufacturing companies in Europe, combining the entire Astra and STAR manufacturing base. It has many factories and workshops both in Spain and abroad.

Features of the arms industry in Spain

In Spain, gunsmiths are united in the Weapons Industry Manufacturers Association.

They produce only high-quality products for hunters. Enterprises can be divided into five categories:

1. Firms in which handicraft and semi-handicraft guns have been set up (Arrieta, A and A, Grull Armas).

2. Workshops where handicraft production of only a few high-end base models at expensive prices (Garbi, José Alberto Garate) is well placed.

4. Small companies, where industrial processing of parts is also established, but for a small number of models with careful manual finishing of each assembled instance (“Parkemi”, “Saraskueta”).

5. Enterprises leading the mixed production of medium and expensive at the price of industrial and artisanal guns ("Ignacio Ugartehea").

The main center of the Spanish rifle industry is the city of Eibar and its surroundings. Guns, nozzles, carbines, pistols, revolvers, pneumatic and pistol weapons are manufactured here. Cold weapons are made in Toledo and Albacete. The largest company producing bullets (Ensab) is located in Madrid. Spanish manufacturers mainly produce double-barreled rifles. These are classic smooth bolts with horizontal and vertical barrels, as well as nozzles. Most of the Spanish arms firms give a ten year warranty.