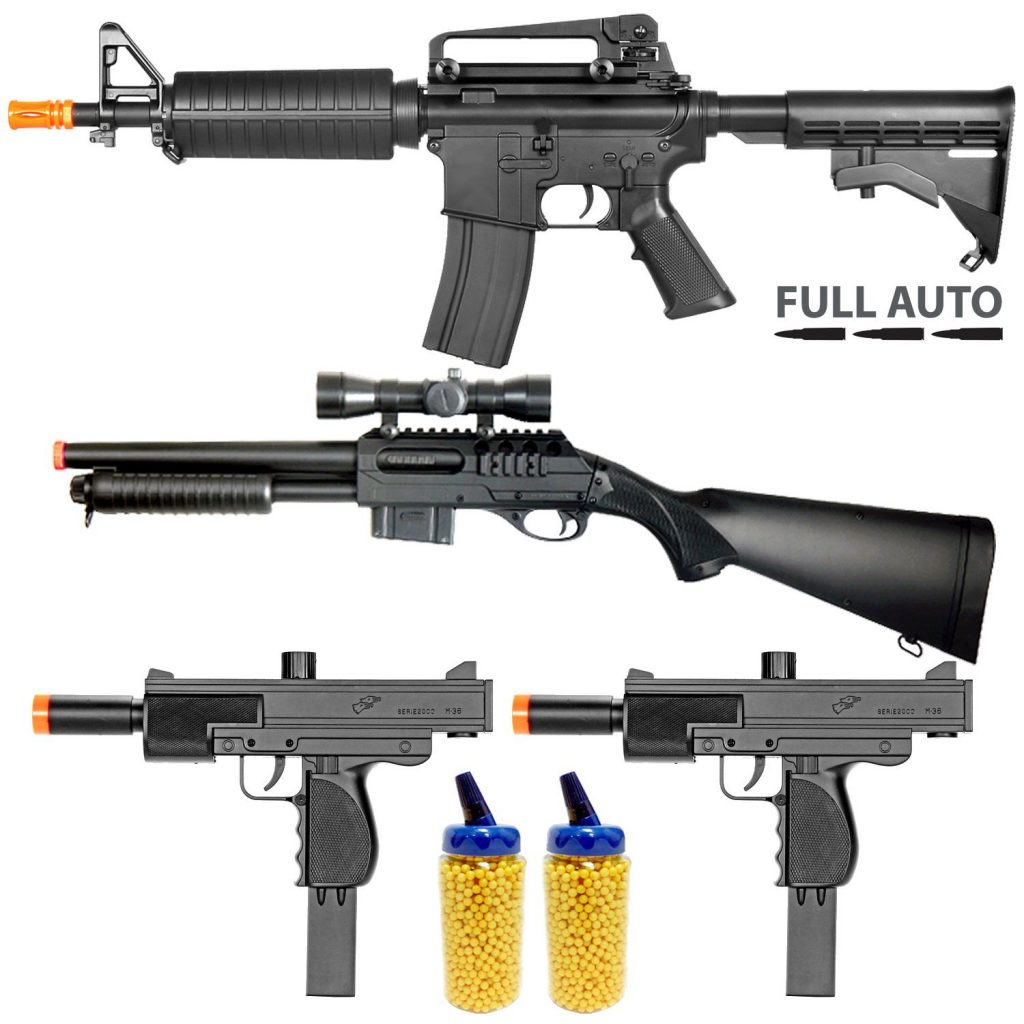 The Chinese manufacturer of airsoft weapons.

A&K specializes in the production of high-quality copies of American machine guns, Dragunov sniper rifles, and M-series bloubek rifles. The company has taken the sphere of production of "American" weapons and keeps the bar on product quality.

The Chinese manufacturer, which is the only one in the world, produces airsoft copies of weapons of the Second World War period, such as MP40, MP44, Sten and others. AGM also produces copies of modern M-series rifles.

Young Taiwanese manufacturer. Not the cheapest company, but the quality of weapons, parts and performance is always at a high level.

The company produces almost the entire range of airsoft weapons, equipment and accessories. This manufacturer has several assembly factories. The main assembly line is in Hong Kong. Classic Army focuses on European standards and is supervised by a Danish quality control company.

The company specializes in the production of professional high-class tactical glasses. The abbreviation of the name stands for: Commando Research Optical System, i.e. points for intelligence units and special forces. The factory is located on the island of Taiwan. The company produces all types of glasses and is certified as a manufacturer of combat tactical optics.

CYMA CYMA is the largest Chinese manufacturer of airsoft weapons and equipment. Despite its fame, the company does not have its own website.

Also, the manufacturer does not put logos on products. The company produces low-priced airsoft weapons which are not worse than ones produced by the Tokyo Marui and the Classic Army.

Despite the fact that its main specialization is paintball equipment, in 2010, APS debuted in the airsoft market with AK series models.

Nowadays, the brand is known in Russia, and it is distinguished from other labels by low prices and, unfortunately, rather weak quality, which the manufacturer himself, however, promises to improve.

For the first time, the company DBoys was able to loudly declare itself by releasing a magnificent AK-series, which goes under their brand KALASH. The company is not limited to the release of only copies of the famous machine. Also of interest is the KAR98K rifle created by the Chinese manufacturer of the World War II model, which features the ejection of liners, and the Glock18C gas balloon, and the new developments that DBoys continues to delight its fans.

The manufacturer of spare parts, known mainly for its pistons with a titanium comb, grenade launcher M72A2 LAW.

Chinese manufacturers of budget parts for tuning. Good in quality, have a very affordable price. The springs are still more than Guarder exceeding their nominal value (the most exceeding is M135, the spring giving 155-160 m/s).

The company produces professional ballistic glasses for military and fire department, which means the highest quality. All lenses are made with high-precision and modern technology and can withstand a shot from a gun from a distance of 15 meters. Evoss Manufacturer of elite models of airsoft guns with high tuning. High-quality components, individual assembly of each unit allows to obtain a stable speed of the ball about 150 meters per second. Each weapon model undergoes multi-stage debugging.

G & G (Guay Guay Gunshop) has been supplying airsoft equipment to the market worldwide for 30 years. It specializes in the production of high-quality external accessories and internal spare parts. All weapons are final modified product. Production covers a huge range. All declared to have initial muzzle velocity of standard models of 90-100m.

Gletcher is a brand of airguns owned by the American company SMG Inc. In 2010, the company SMG Inc. began deliveries of Gletcher pneumatics to Eastern Europe and Russia. SMG Inc. in the first place, offered Russia metal models with a blowback shutter (when firing), which imitate firearm pistols to the maximum extent. Since 2011, Gletcher has adjusted the release of a series of airsoft guns using 6mm plastic balls.

Taiwanese company specializes in the production of quality parts and spare parts for airsoft copies of weapons and pistols, high-quality airsoft balls for all weights and protective accessories for the game, such as goggles and gloves.

King Arms manufactures components and accessories for airsoft. Constantly improving products, the company raises the level of quality, trying to keep the minimum cost. Thanks to this, King Arms has earned many awards.

One of the leading Taiwanese manufacturers of airsoft weapons. The company specializes in airsoft copies of gas-powered weapons. Characterized as a reliable manufacturer, providing a decent service to its models.

The Taiwanese company KWC (Kien Well Toy) has existed since 1978. Initially, the scope of its activities was limited to the production of a series of miniature cars in the markets of Taiwan and the United States known as Matchbox. But since 1984, KWC, in collaboration with Japanese manufacturers, has begun fully computerized development and production of air pistols. To date, airsoft replicas of combat pistols and mini-UZI from KWC are in demand among airsoft players all over the world.

The Taiwanese manufacturer of models of airsoft weapons and high-quality tuning kits. Differs in excellent manufacturing quality of external parts and elements of airsoft machines. This company achieves maximum authenticity with combat counterparts. Weapon models are made from high quality materials, steel and wood.

Taiwanese manufacturer of parts and components for a variety of industries, including network and production equipment, as well as auto parts for luxury Japanese car brands. The quality of parts, components and parts for airsoft will satisfy the most picky and selective player. Lonex is positioning itself as a manufacturer of some of the highest quality parts and elements for airsoft weapons.

Manufacturer of accessories and spare parts for airsoft weapons. The head office is located in Hong Kong. Product quality is at a decent level. The company also produces premium balls of different weights.

Magpul Industries was founded in 1999 by a former US Marine, Sergeant Richard Fitzpatrick, with the goal of developing a simple device to facilitate store recharging during a battle.

With a focus on innovation, simplicity and efficiency of the product line, the company has grown rapidly over the past ten years and has begun to fully specialize in integrated weapon components, accessories and firearms design.

Manufacturer of one of the highest quality gloves. Headquarters in the United States. The company manufactures gloves for many areas of activity: airsoft, paintball, fishing, hunting, motor racing, motorcycling, cycling, etc. Gloves are used by professional military from around the world.

The brand is one of the list of brands of LayLax. Produces parts for internal tuning airsoft weapons. Known for the production of high quality thin stem.

The company's reputation has grown rapidly due to its focus on creating high-quality parts. The popularity of this brand is constantly growing. This manufacturer is known among the workshops involved in tuning, and is considered a company that you can "trust."

New to the airsoft equipment market. The company pursues a tough marketing policy in order to find its niche in the market. The Taiwanese factory maximally copies any combat equivalent and practically does not use plastic in the manufacture of weapons, only where it is on the combat equivalent (forend, butts, etc.). The company produces one of the most realistic versions of the AK47, made of metal and wood. SRC airballs are manufactured to the highest standards.

StarAirsoft was created in 2002. In 2003, the company began producing a wide range of high-quality airsoft products, such as the G36 model range and GP-30 grenade launcher. Since 2002, the company has gained an international reputation and cooperates with Taiwanese manufacturers. http://www.starairsoft.com/

The brand is also known as Sig Sauer. Swiss Arms has earned the respect among airsoft players for quality, and most importantly, unique airsoft copies of weapons. At the same time, the company is always striving to improve productivity and increase the availability of its unique products.

The company is one of the most high-tech manufacturers of airsoft products. The main office is in Japan. Initially, it specialized in spare parts for airsoft weapons. Now the company has begun production of not only parts, but also fully assembled airsoft copies of weapons for military training. Such a weapon is called PTW (Professional Training Weapon) and TW5 (Training Weapon 5).

The company Umarex is known worldwide as a manufacturer of high-quality pneumatics. The history of the company dates back to a small enterprise for the production of signal pistols and tear gas cans, founded in 1972. Only some time later, the production was significantly expanded by pneumatics, and the name Umarex was not chosen immediately, this is the final version after UMA Mayer & Ussfeller GmbH and Umareck. Today, Umarex is a huge concern with a number of subsidiaries (including in Russia). http://www.umarex.com/

Full name - WE Tech. Taiwan manufacturer of airsoft weapons. Specializes in the production of models working using gas mixtures. The same models are made both for work on gas mixtures of the type UltraPower Gas, and for use on CO2.